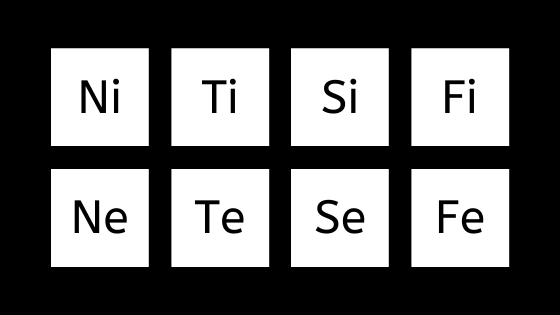 Each function has its own name, depending on its position in the stack:

Bodily needs, aesthetic appreciation, and symbolism in relation to the five senses are hallmarks of Si. The smell of a warm cup of mocha may bring back memories of reading in the library as an adolescent.

A familiar song playing in a supermarket may revitalize the times when driving alone in a car after spending time with a previous flame. Under stress, Si attempts to suppress and block out negative memories through the making of new ones in quick succession.

Si is an associative function, and places value and meaning on memories which may resurface unknowingly to the individual. Many musicians or poets have Si in their function stack, and are able to refile their memories to produce emotionally accurate works of art.

Like a filing cabinet, data is stored away in the unconscious, to be used again when the occasion calls for it.

Adrenaline junkies, thrill seekers, and athletes with high kinesthetic intelligence use Se. The present moment, in all of its intensity, is of greatest importance, and reality is made through deliberate movement and thought.

Se takes in as much sensory information as possible from the environment to determine the next best course of action. If it fails, a backup will quickly be consulted and launched head-first into the real world.

Se rapidly and automatically scans the immediate environment for possible opportunities or threats. It is proactive, quick to react, and insanely adept in emergencies.

Visions, “a-ha!” moments, and peak experiences are all pillars of Ni. It seeks wholeness, the greater picture, and ultimately the unity of the ever-perplexing nature of the world.

Ni seeks to understand the entire state of affairs as a cohesive whole, to make predictions of what the future will (not may) be like. Similar to a biological cell, the nucleus is the core vision Ni has mapped out, and the supporting cellular organelles are the concepts which grow and interact to facilitate growth.

Flashes of creative brilliance and thorough understanding come to Ni, which appears strikingly different from any other function. It’s supremely difficult to vocalize how said realizations have surfaced from the complex workings inside the mind.

Ne is all about new ideas, abstract connections, and a stream of never-ending “What if?” statements. It takes seemingly disparate subjects and ties them together with finesse.

To the outsider, Ne appears wild, frenzied, and slightly nuts. In the midst of the mumbo jumbo of ideas, Ne wants to push the envelope of exploration and go as far as it can—there isn’t even a box to begin with.

During conversation, Ne readily jumps from one tangentially related idea to the next—so a chat about the latest superhero movie can bleed into the larger societal structures in play for characters, which could then leap…

…straight to how a character’s quirk reminds the person of another character in a different movie, which may then lead to a discussion of how movie directors differ from each other. Random and rapid-fire, all the time.

As an iterative framework that seeks to boil elements down to their bare-boned fundamentals, Ti propagates and filters incoming information and sifts through inconsistencies with critical thinking. Ti is always open to debate, although notoriously difficult to convince or persuade.

Inductive reasoning is preferred to deductive reasoning, as the missing links between abstract phenomena are unconsciously connected in the shape-shifting Ti web of ideas.

For instance, in the mastery of a subject, Ti wants more than just the facts—it needs to understand the underlying mechanisms, nuances, and framework of the entire sphere of knowledge. This process, naturally, is long-winded and involves months (or years) of uninterrupted, alone time to crystallize.

A series of experiments conducted in reality, after trial and error, help Ti formulate larger patterns and laws to explain the unpredictable and fluctuating nature of reality.

Proven methodologies, measurements, and systems are Te’s cup of tea. Te is a go-getter, and thrives under action and having things work. It seeks to optimize experiences, streamline procedures, and categorize tasks to productively plow through each day.

Te is all about strategy and method, and thrives on continuous improvement to pre-existing systems. When faced with a problem, Te lays out a step-by-step plan in order to fix and mitigate errors as they occur in real time.

The cause-and-effect nature of the scientific method is a quintessential Te process, whereby variables are clear and an end result can be adequately measured.

Moral judgements, stone-hard values, and clear likes/dislikes are what fuel Fi. It’s fiercely protective of people and ideas it holds dear and perceives to be meaningful or important.

It seeks peace within itself first and foremost, and holds authenticity to the highest regard. In terms of behavior, Fi appreciates consistency and ethicality above all. It can put itself in someone else’s shoes, therefore understanding the meaning of empathy.

Falling privy to “nonsense” trends is akin to committing Fi suicide—as it would mean adopting the collective mindset or taste—a true disappointment and betrayal to the true self.

Fi’s value system may take years or decades to fully mature and solidify. After finally confirming said values internally, Fi then can make decisions and undergo actions that fully align with them.

Community, intergroup harmony, and the expansion of social activity characterizes the naturally giving nature of Fe. Naturally sympathetic and caring, Fe considers the wellbeing of the group over its own preferences.

Fe seeks to belong to a larger collective; a community of warm and supportive members. Common manners and social rules are also held highly by Fe. Chameleon-like in nature, Fe openly expresses sympathy for others’ feelings.

Fe wants to fit in; to “feel accepted” and not weird (or an outcast) by learning the unwritten rules of popularity. Others’ actions, styles of communication, and fashion style may subconsciously influence Fe.

At the core, Fe picks up cues from the environment to know how to act in order to feel the reassurance they crave from external approval. Fe wears its heart on its sleeve, and makes it known. However, Fe can also be a master actor, with its imitative superpowers.