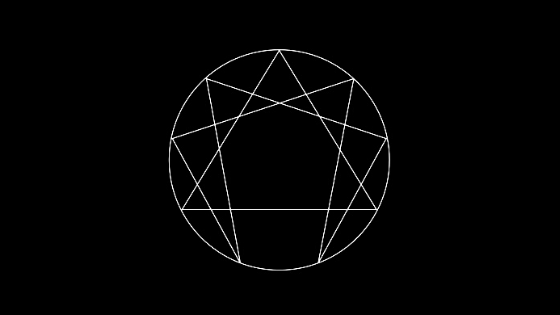 According to the moon chart and birth coordinates, natal charts govern how each individual’s life will play out. Life path numbers claim to “see all.”

Now, with all astrology and numerology aside, many takes on unrooting one’s personality exist, and some err on the side of pseudoscience.

Philosophy and spirituality have taken on major roles in shaping the open-ended study of personality.

By combining and cross-pollinating the larger concepts of multiple teachings, individuals can seek out and create new frameworks to navigate the murky waters of human behavior.

A nine-pointed, interconnected personality model with wings, tritypes and instinctual variants serves up an approach unique to type models: the deepest desires and motivations of each Enneatype.

You can take the Enneagram test here with Truity.

(Note: The link above is an affiliate link to Truity. At no additional cost to you, I will earn a small commission with each assessment purchase.)

The teachings of Gurdjieff and Naranjo have shaped the geometric model of the Enneagram.

Core components of the Enneagram include ego fixations, primary desires, fears, vices, and virtues. The nine Enneatypes fall under three centers: the Body (8–9–1), Heart (2–3–4), and Head (5–6–7).

Each center (in any order) contains a repressed emotion, hidden to the public:

Under unhealthy (stress) or healthy (growth) conditions, each Enneatype will respectively disintegrate or integrate into another type, and take on some of their trademark characteristics.

Theravada Buddhists embrace the idea of the “non-self”, which upon successful separation of the ego, opens the doors to Nirvana. The state of Nirvana is the pinnacle of the human experience—to forgo the sufferings and torments of the earthly realm and flourish in the higher vibrations of the heavens.

The ultimate goal of attaining the non-self, according to Theravada doctrines, is to let go of the powers of the unconscious (and conscious) psyche.

In return, the individual can more easily become in tune with frequencies to divine beings and dimensions. Out of body experiences (OBEs) are common at this stage.

Mahayana Buddhists, on the flip side, moves toward a total emptying of the self; a complete erasing of autonomy. True fulfillment arrives from the feeling of interconnectedness and compassion with all other beings.

Down to its core, the driving force is a sense of radical harmony, in tune with the constant ebb and flow of the Earth.

In any traditional English literature class, the shocking practices associated with the four humors may be presented. The concept is primarily linked to highly respected Greek physician, Hippocrates.

He’d often request medical staff to perform invasive lesions to “let out” fluids from patients they believed were saturated with a particular substance. Around 400 BCE, it was seriously considered the prime treatment.

During medieval times, individuals would be categorized into one out of the four Hippocratic types according to the concentration of their supposed internal bodily fluids:

Newer adaptations and interpretations of the Four Humors (e.g. the Kiersey temperaments) in the 21st century break them down into four quadrants:

Parallels between the four humors and the DISC workplace communication styles also exist:

Albert Maslow decided to capitalize on the major motivations (which he called “B-Motives”) each person consciously and unconsciously strives to achieve and secure in their lifetime.

The motives are largely existential and spiritual, ultimately directed in the pursuit of finding purpose and meaning.

In psychotherapy, the implementation of B-motives guides…A lack of B-motives in one’s life is thought of to contribute to the Jonah Complex—the fear of success itself.

It draws its name from the biblical reference of Jonah the prophet, who gets swallowed by a whale and remained in its belly for three whole days.

There are 14 B-motive measures in total:

Maslow also proposed D-motives, or Deficiency motives. They trickle down to the physiological level at the bottom of his famous pyramidal hierarchy of needs.

Although widely cited by psychology textbooks and seemingly applicable to decision-making, Maslow’s model has garnered its fair share of critique.

For instance, the third level of love and belonging has been widely disputed. Some propose that it’s possible to climb up to the self-esteem and even self-actualization levels by skipping the third one altogether.

In Summary: Spiritual Takes on Personality

As personality psychology walks the tightrope between science and philosophy, its very nature seeks qualitative factors in addition to rigorous quantitative measures in behavioral observations and theories.

Spiritual takes in the field offer additional insights into the fascinating and ever-developing nature of human nature!