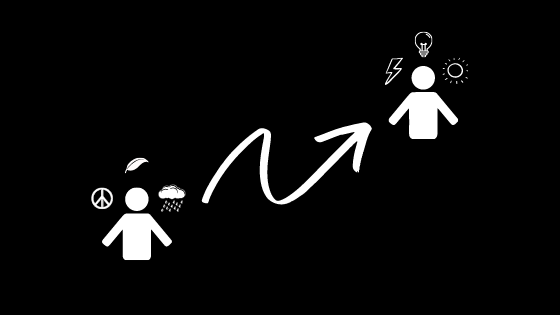 Can you change your personality?

We’ve heard of stories where the shy, lowly boy in high school finds his tribe and pace—and becomes a confident, high-soaring entrepreneur after college. He wrote a bestselling productivity self-help novel and is now considered a world-class writer and public speaker.

On the flip side of the coin, we may also know of a straight-A student council president with top-notch style and charisma who fell down a black hole of substance and emotional abuse. And may have gotten in trouble with the law.

Obviously, these are extreme examples—most former classmates will live relatively normal lives and experience less dramatic shifts. (And perhaps pass around the aforementioned examples as news to previous classmates.)

Personality is influenced by both innate features (e.g. genetics) and external factors (e.g. environment and education). The weighing of both depends on the individual, which is why everyone has their own unique strengths and challenges.

So, can you change your personality?

In short, yes and no. Let’s explore how and why.

DNA, genes, genome charts, blood types…the biochemical makeup of our bodies can speak a lot about how an individual will behave as they mature. This may explain why we’re attracted to certain natural bodily scents on others and facial features. Think all five senses: voices, physiques—and even the taste of another person’s saliva!

The most extreme psychological stance towards biology is the nativist viewpoint, with a belief that each behavior can be traced towards a certain gene (e.g. the more controversial “Religious” or “God” gene). The earliest behavioral scientists leaned towards the “Nurture” stance. Noam Chomsky, American linguist and cognitive scientist, proposed that language is acquired innately.

What other genes enter the scene for our personality? Abnormal psychology and psychiatry look into various personality disorders and potential genetic variants (or mutants) that may have been responsible for certain traits. The Big Five Neuroticism (N) factor, for example, has been linked to many personality disorders such as OCD (Obsessive-Compulsive Disorder) and BPD (Borderline Personality Disorder).

In forensic sciences, the dark personality triad is a highly sought-after topic. When analysts and researchers work together on a challenging, multifaceted case, psychology is one major area they study. As both an art and science, law enforcement works hand-in-hand with many other professional disciplines as well such as ethics and political science.

The Fun Part: Rewriting Our Personality

Here comes the part where new-age “happiness engineers” in organizations sprinkle personality magic dust. While certain components of our core personality may appear to be more hard-wired, other parts may be effectively tinkered with over time. The extent to which certain habits affect our long-term behavior.

Neuroscience has a lot to say about learning—and how practice gradually shapes our brains. The more you perform a task through repetition, the less energy it takes the brain to retrieve that very learned action or information stored in the long-term memory (LTM) box. Cognitive science suggests that personality is attached to the personal constructs we have of figures in our lives.

Personal constructs rely on predictions of behaviors within a certain context. They are also viewed in terms of two poles opposite to each other (i.e. a dichotomy). For example, energetic versus passive. Most notably, Kelly’s personal construct theory relies on each individual’s own unique life experiences.

The labyrinth is conceived as a network of constructs, each of which is essentially an abstraction and, as such, can be picked up and laid down over many, many different events in order to bring them into focus and clothe them with personal meaning.

Moreover, the constructs are subject to continual revision, although the complex interdependent relationship between constructs in the system often makes it precarious for the person to revise one construct without taking into account the disruptive effect upon major segments of the system.

Behavioral epigenetics are when genes (and neurotransmitters) venture to the psychological gym and essentially “work out.” In the Nature vs. Nurture debate, many modern biopsychologists are leaning towards the “Nurture” aspect (closer to Humanism). That includes our environment, lifestyle habits, and diet.

The ‘epi’ in epigenetics is derived from Greek and means at, on, to, upon, over or beside. The DNA in our cells is not some pure, unadulterated molecule. Small chemical groups can be added at specific regions of DNA. Our DNA is also smothered in special proteins. These proteins can themselves be covered with additional small chemicals. None of these molecular amendments changes the underlying genetic code.

But adding these chemical groups to the DNA, or to the associated proteins, or removing them, changes the expression of nearby genes. These changes in gene expression alter the functions of cells, and the very nature of the cells themselves. Sometimes, if these patterns of chemical modifications are put on or taken off at a critical period in development, the pattern can be set for the rest of our lives.

– Nessa Carey, Author of The Epigenetics Revolution:
How Modern Biology Is Rewriting Our Understanding of Genetics, Disease, and Inheritance

Biohacking sounds like a term straight out of a science fiction movie, and it used to end there. However, an increased number of research studies now focused on behavioral epigenetics may be onto the next generation of smarter and healthier humans. Access to genetically optimized crops and now plant-based meats, for example, may promote better epigenetic responses in the immune system.

The best case studies focus upon biological twins who grew up far apart from each other—with different cultures and diets. These scientific studies are non-invasive and provide tremendous insight into how both nature and nurture come into play for us. One of the largest study of its kind is the Minnesota Twin Family Study.

So, At The End of the Day, Can You Change Your Personality?

Again—yes and no. There are certain aspects of personality an individual can change, and others (e.g. brain chemistry) that are more (if not completely) hard-wired. The more malleable aspect is known as character, which can be put into play through good habits and practice. Character can be perceived both inwardly (“I am…”) and outwardly (“People see me as…”).

Some parts of personality, such as a short fuse or tendency to procrastinate, can be challenging to change. Even through deliberate focus, a bad day could allow them to slip up once in a while. That’s the human experience: an assortment of peaks and valleys; an ever-expanding web of experiences and memories.

The key is focused perseverance—a right-handed person who trains all of their life to write with their left may find it easier to stick with what they’ve been practicing. This leads to another question: Does hard work and practice ultimately beat talent? (That’s for another blog post, though.)

They may be able to revert to their right hand within a short time frame, but may have little motivation to do so after decades of the less dominant hand. What could this say about concentrated and purposeful practice, especially in the competitive sports scene? Prior to intense exams? In the entertainment industry?

Q: Have you been released or are you still a beta version?

A: No official release of myself will ever follow!